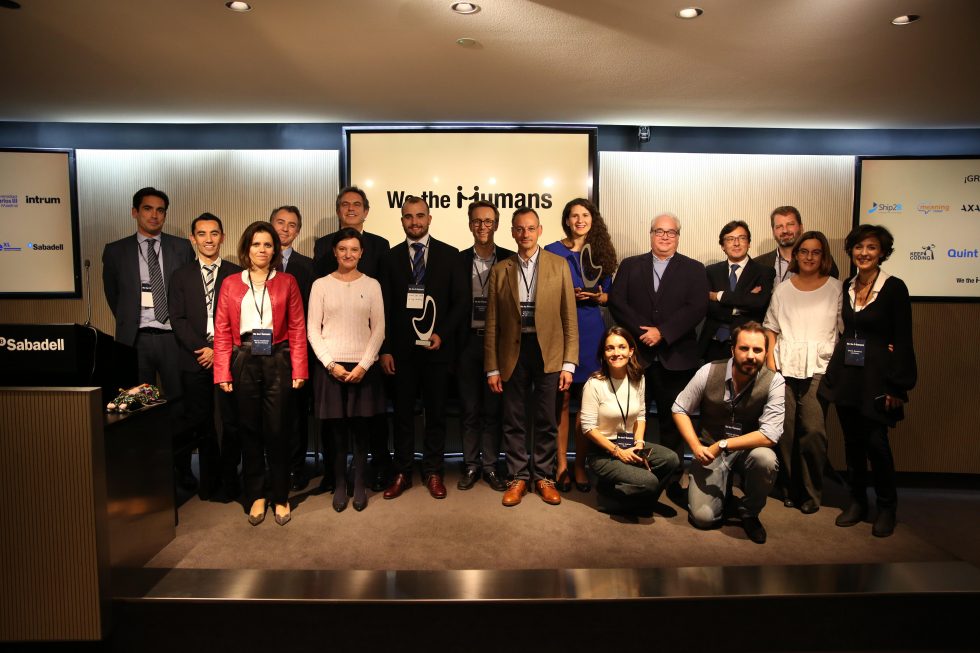 Madrid, November 7, 2019.- Two innovative projects are the winners of the 1st AI Contest for Purposes Social delivered yesterday by the independent think tank We The Humans.

One of them proposes using Artificial Intelligence (AI) to improve sustainability and efficiency in agricultural plantations and the other seeks the improvement of the symptoms and monitoring of patients with Obstructive Sleep Apnea (SAOS).

AI Crop Harvesting is the name of the winning project in the Entrepreneurs category. Agriculture is one of the main causes of the greenhouse gases and is estimated to account for 10-12% of total greenhouse gas (GHG) emissions. The objective of this project is to present an integrated data analysis instrument to help farmers make the best decision about their fields. For this purpose, it includes an analysis of the different crop varieties considering local sales in order to reduce the mark of their products. Artificial Intelligence (AI) can help to solve some of these problems.

Saturn Labs’ Upnea project has received the Startups category award. This is an innovative idea to alleviate the effects of Sleep Apnea and improve its diagnosis, combining a procedure based on the analysis of facial images of patients, their oropharyngeal area, voice recordings and other important parameters collected in a questionnaire carried out by a bot to help the doctor in detecting the severity of OSAS and its evaluation through a mobile terminal. Patients can speak to a bot, answer questions, upload voice or image files that will be processed using machine learning and  the mediation by doctors and healthcare professionals.

Both winners will receive financial aid from the credit management services company Axactor; as well as technological capabilities of IBM and MeaningCloud and mentoring in “impact economics” within the framework of the Sustainable Development Goals (SDGs) facilitated by the startup incubator Ship2b. Also, they will access legal advice from the Écija brand and support in the development of your project by the Entrepreneurship Service of the Carlos III University of Madrid (UC3M) for the “Entrepreneurs” category. For “Startups”, UC3M offers the possibility of accommodation in its Science Park during the first 6 months. In the same way, they will be able to participate in the draw for two scholarships to study relevant master programs in the exchange of Big Data and Machine Learning of the exponential learning IE and KeepCoding.

The award ceremony was possible yesterday thanks to the Intrum’s collaboration, a leading supplier of credit management services.

I Meeting of Ethics and Artificial Intelligence

Both entrepreneurs received the news yesterday at the 1st Artificial Intelligence Ethics Meeting organized by We The Humans. During the meeting, its president Juan Ignacio Rouyet recalled the mission and objectives of We The Humans to think about the evolution of technology and its impact on ethics and society. From this platform, an ethical use of AI is encouraged and promoted in every link of the chain, from academics, developers and startups, to technology companies, always putting people / users at the center.

We The Humans aims to “think about the citizen and adopt his voice in the public and regulatory debate on issues such as the impact of AI on employment, inequalities derived from the misuse of technology, AI security or the law of robotics” said Rouyet, highlighting that “behind an ethical AI there is an ethically responsible person.” During the event there was also an opportunity to know the points of view from some of the industry’s first personalities. This is the case of Gemma Galdón, founder and CEO of Éticas Research and Consulting, who took the opportunity to ask to stop talking about everything that they have been studying about ethics and artificial intelligence for two years, and start doing.

The 120 attendees to the 1st Meeting on Ethics and Artificial Intelligence were able to listen to a multidisciplinary round table. Antonio Rodríguez de las Heras, professor emeritus at the Carlos III University of Madrid, explained this debate goes beyond a technical question that involves “a cultural change, because artificial intelligence breaks with established issues such as’ it must be ‘that guided our lives and now we have the opportunity to restructure everything”.

María Borbonés, AI specialist at IBM, explained the beginnings of this technology and acknowledged the effort that the industry is making to eliminate the biases in algorithms and to guarantee transparency of  these processes. Javier Martínez (executive director of Ship2B) and José Luis Martínez (COO of MeaningCloud) were also at this table, as well as Alejandro Touriño, managing partner of Écija. Considering this new reality, he called for a clear regulatory framework that resolves some of the Ethical dilemmas companies find in developing artificial intelligence projects.

The institutional closing of the event was carried out by David Cierco, CEO of Red.es. He recalled the importance of the role that administration has in the participation of the artificial intelligence ethical design in order to achieve social justice goals. “Times are changing and we have the opportunity to build a world with technological development based on ethical values” he said.